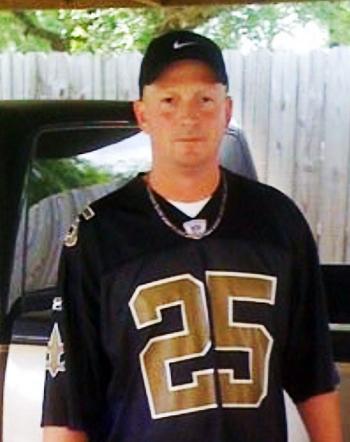 June 4, 1977-October 25, 2015
Funeral services will be held Friday, Oct. 30, 2015, at 11 a.m. at Ibert’s Mortuary in Franklin for Rickey Dotson Jr., a native of Mount Pleasant, Texas, and a lifelong resident of Franklin, who passed away at the age of 38 on Sunday, Oct. 25, 2015. He will be laid to rest in the Perpetual Park Cemetery. Pastor Donnie Crane will conduct the services.
A gathering of family and friends will be held Thursday, Oct. 29, 2015, at Ibert’s from 6 p.m. until 9 p.m. and again Friday from 8 a.m. until time of service. Serving as pallbearers will be Billy Hale, Tony Hale, Willie Landry, Asa Duncan, Cameron Duncan, Lou Pichoff Jr., Nick Butaud, and Jacob Adams. Honorary pallbearers will be Lou Pichoff Sr. and Shelby Breaux Jr.
Rickey loved life and lived it to the fullest. Some of his favorite pastimes were hunting and fishing. He also enjoyed cooking for family and friends. Anyone who knew him knew that he was an avid and passionate Saints fan. He will be deeply missed by all who knew and loved him.
Survivors include his three children, Kortlyn Dotson of Franklin, Elexus Dotson of Franklin, and Justin Dotson of Patterson; his mother and stepfather, Georgia and Mark Mathis of Graham, Texas; two sisters, Mandi Kennard and her husband, Brett, and their children, Kayleigh and Kendall, of Bastrop, Texas, and Tonya Royston of Bastrop, Texas; a stepbrother, Dakota Mathis of Stephenville, Texas; his grandparents, Joanne Dotson of Clarksville, Texas, and John Charlie Dotson and Donna Dotson of Bagwell, Texas; his aunts and uncles, Ruthie Prince of Franklin, Barbara and Lou Pichoff of Baldwin, Jerry Chesshire of Franklin, Steve Dotson of Paris, Texas, Linda and Charles Ardoin of Cartersville, Georgia, and Pam Comeaux of Jeanerette; his godchild, Devin Butaud; a dear friend, Janet Marcotte of Franklin; and many beloved cousins and friends.
He was preceded in death by his grandparents, Homer and Lorene Chesshire; aunts and uncles, Minnie Jones, Mary Chesshire, Shirley Buck, Homer Chesshire, and Oba Chesshire; and two cousins, Lester Butaud and Dusty Hemmingway.
Family and friends may view the obituary and express their condolences online by visiting www.iberts.com.
Arrangements have been entrusted to Ibert’s Mortuary Inc., 1007 Main St., Franklin, LA 70538, 337-828-542